I will be part of a group exhibition at the Galerie de l'Instant , 46 Rue de Poitou, from 11 March until 11 May, here is the flyer. Unfortunately I won't be able to attend, as I am in Istanbul! 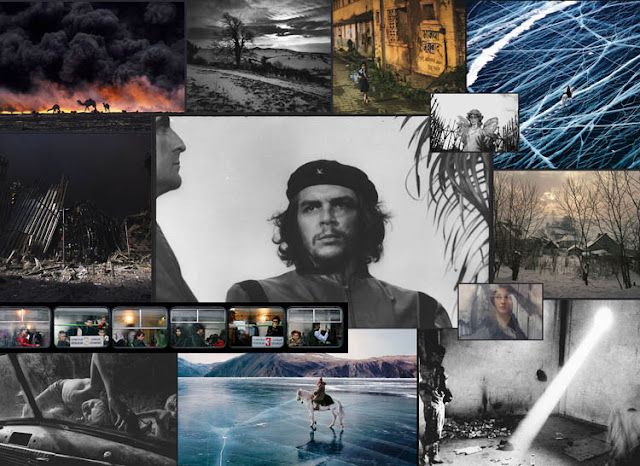 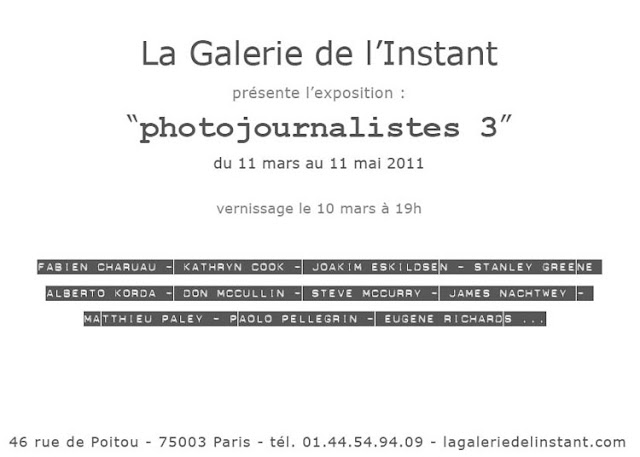 I am back since 10 days from an incredible 1 month winter expedition in the afghan Pamirs! It's, of course, a long story - and over the next months I will talk about it via my images (haven't even had time to go through them yet). But, following numerous requests, here is a quick sum up...

I arrived on January 21st in Kabul. On 23rd morning, thanks to good weather, we (that's Laurent Fleutot and Louis Meunier, more about them later...) were in a hired 4 seater Kodiak (not Zodiak!) plane bound for Kret village, towards the end of the Wakhan Corridor (approx. here, where the "V" of Vakhan is written) - but still a long way to the Little Pamir region, our destination - the abode of the Afghan Kyrgyz. It was my second winter expedition there. To my knowledge no one ever went there twice in winter (I was there in 2008 as well). 7 days and many yaks, camels and horses caravans later, we were in the Little Pamir. We were there to shoot a film. You can see more about this here, on the official website (which is being built, so check again later).

We were on the road, walking, for 23 days, at about 4200m, with temperatures between -10 and -30 C, no showers and only rare smoked in shepherd houses as resting places. Of course it was tough at times, but then again, it was incredibly beautiful.

We came back down from the Little Pamir in a snow storm. After 8 days of constant snow, walking over a a frozen river (the only way down), we were back in Kret village. We called in Kabul with our satellite phone to get back on that Kodiak plane. The sky had magically cleared. We were told it's possible but please, first we needed to clean the snow off the airfield. The village head gathered a few manly souls and off we were at the airfield, shoveling off the snow that would bring us back to civilization... 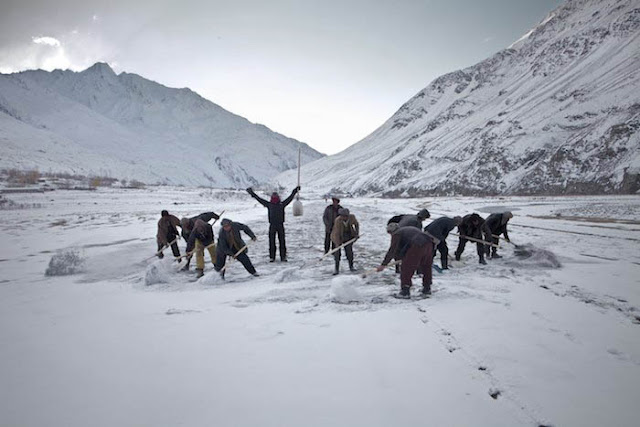 Djibouti, for a piece of Africa.

I have just finished uploading my story on Djibouti. Below a few preview images - you can see the whole story on my website, under the link "Stories  <  Djibouti, For a piece of Africa".

A dwarf-sized country with a giant’s strategic importance, Djibouti lays at the heart of a troubled hot spot in the Horn of Africa. Of prime importance in the world of international geopolitics, it is a country of armies, secret service agencies, refugees, aid organizations and wheeler-dealers. 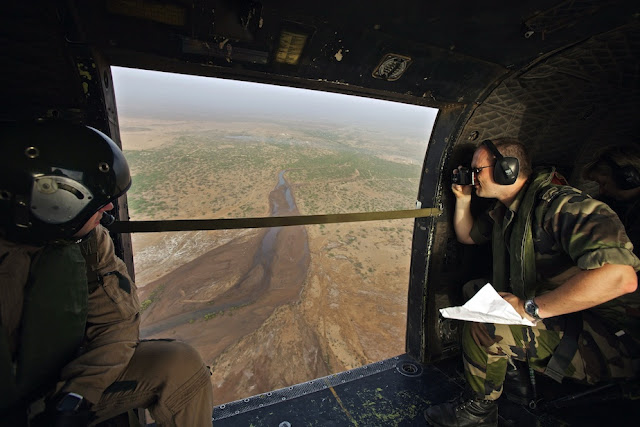 Djibouti is only as large as the European tip of Turkey. It has no natural resources, agriculture or forests —it barely even manages to feed its own nomads. It could have been a worthless piece of land, were it not for something that geo-strategists prize as much as property agents: its location. 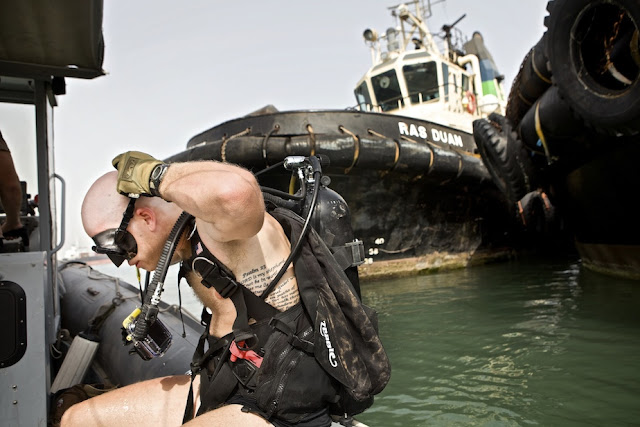 A US diver searches for explosives, fearing an attack on the only US base in Africa. 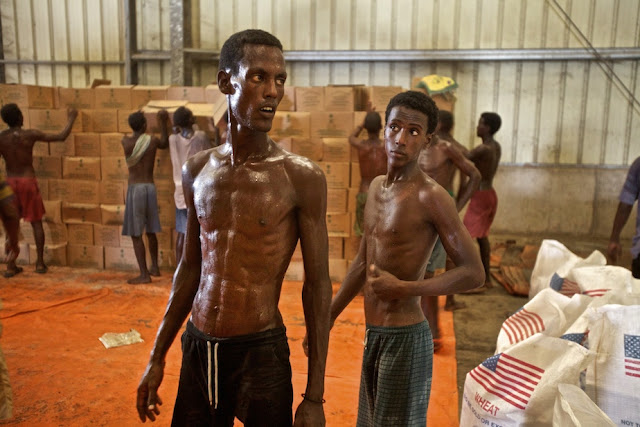 Daily-wage workers unload dates sent by the UN’s World Food Programme. The destination: Ethiopia. Djibouti is one of the biggest transshipment points in the world for the UN. There, 13 to 14 million people receive assistance through the world’s largest food-aid programme—all transported through Djibouti. This tiny country is absolutely essential for the survival of a nation with the second-largest population in Africa, for Ethiopia’s traditional access to the sea via Eritrea, has been blocked since a border conflict in the late 1990s. 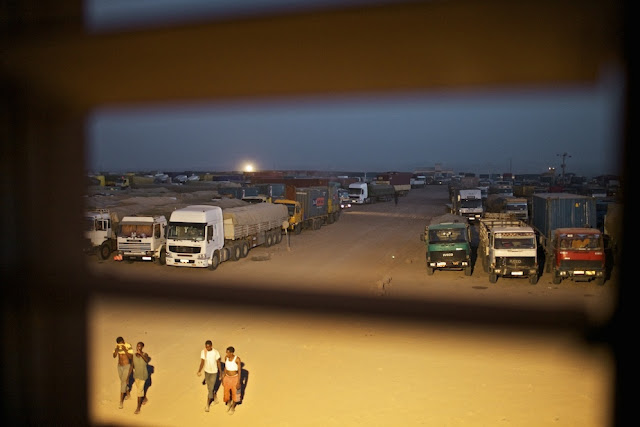 Almost 7 million tonnes are transshipped through the port annually. Every day, 500 Ethiopian trucks pass through, sometimes 200 for the WFP alone. 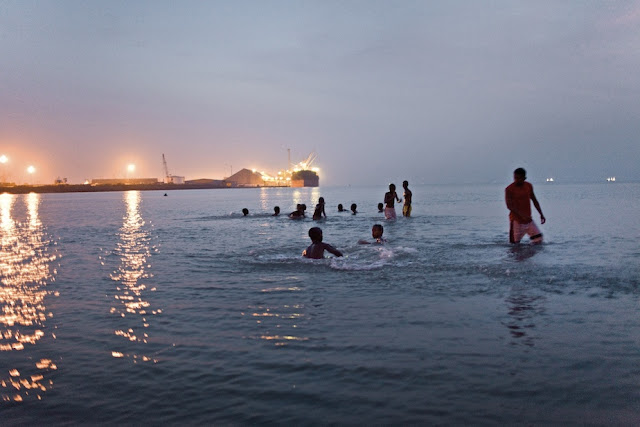 It is so hot that the beach only comes alive at sunset The old port lies on the other side. Containers are now handled at the new terminal, one of the most expensive in the world. Djibouti’s government hopes to keep capitalizing on the country’s location—and dreams of becoming a second Dubai. 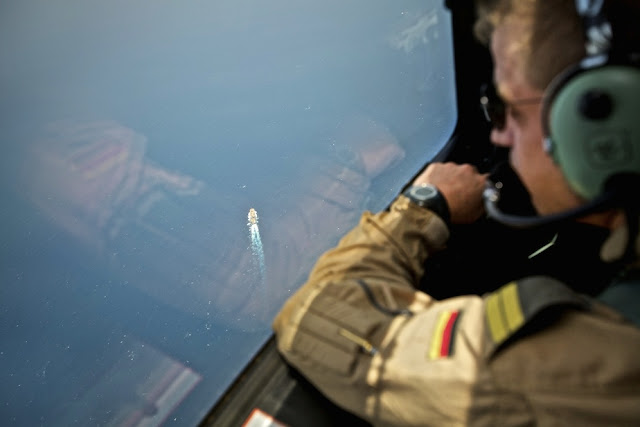 “We’ll fly down the corridor and turn around at the end,” says the tactical coordinator, nicknamed ‘Tacco.’ These German army men are on a mission as part of the EU’s Operation Atalanta. They have 8 hours to locate the wooden cutters and speedboats of Somali pirates. 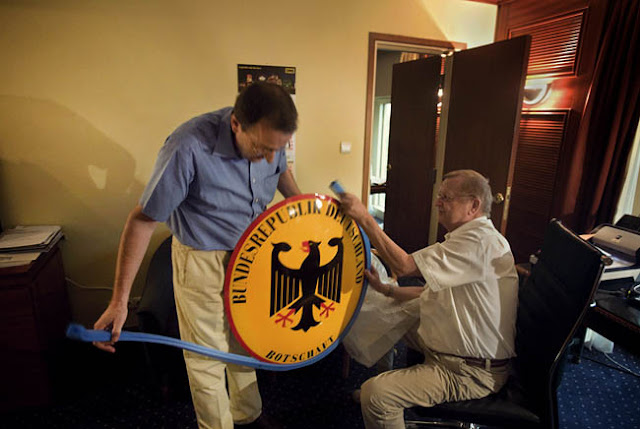 Setting up the first German embassy in Djibouti. Germany's army presence is there to "protect its foreign trade interests" as well as to partake in the EU's Operation Atalanta. 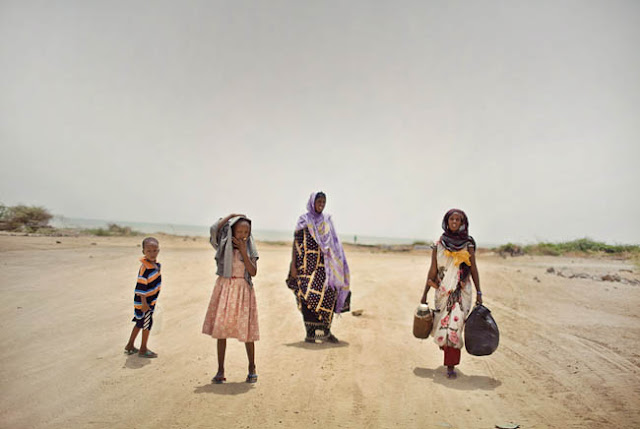 Somalian refugees fleeing starvation wait at the border of Djibouti for permission to enter - in vain. Only war refugees from central and southern Somalia are accepted. These women and children are from North Somalia. 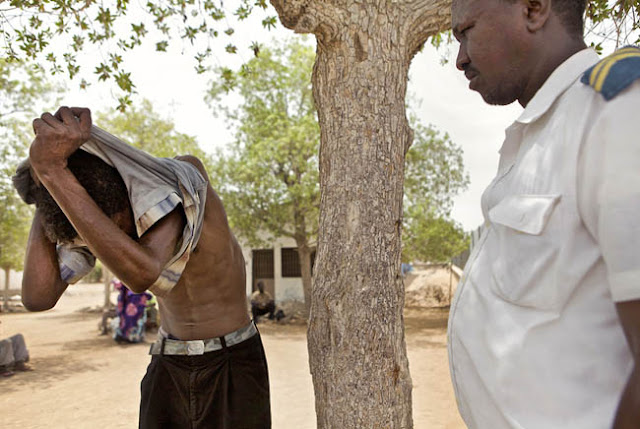 Djiboutian Police inspecting bodies of recently accepted Somalian Refugee asylum seekers, on the border with Somalia. The presence of scars could indicate a refugee's involvement with extremist organizations such as Al Chabab in Somalia, in which case further questioning is necessary. 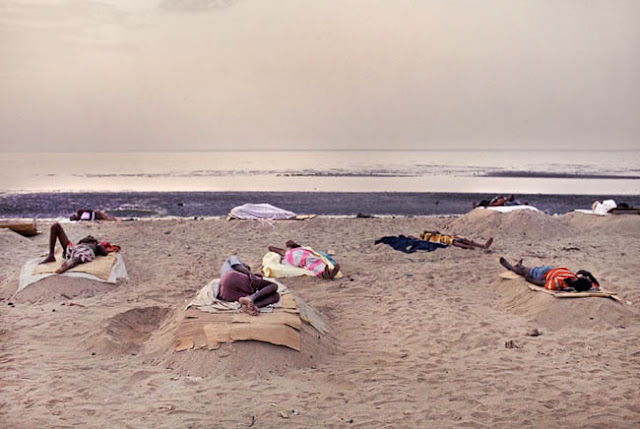 Illegal refugees sleeping on the beach. About 100 non-registered refugees arrive from Somalia every day, trying to either find work in Djibouti or to cross the Red Sea to Yemen, on their way to Dubai. 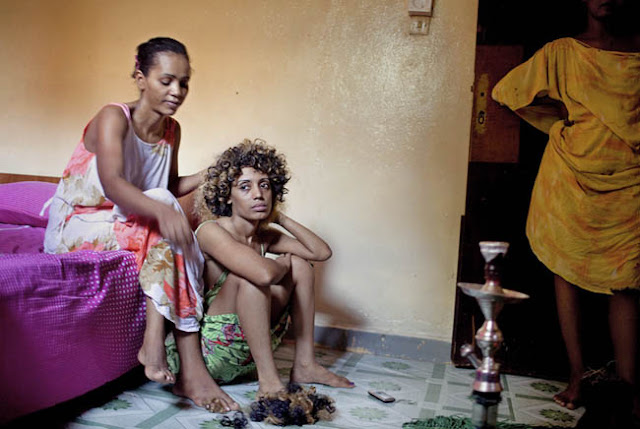 Muna is combing Tina’s hair; the two Ethiopians prostitutes will soon be heading to a club. “The best is to find an American soldier,” says Tina. “The French are the most generous clients; they pay for our apartments so that we don’t have to work. But sooner or later, they all go back to their wives.” 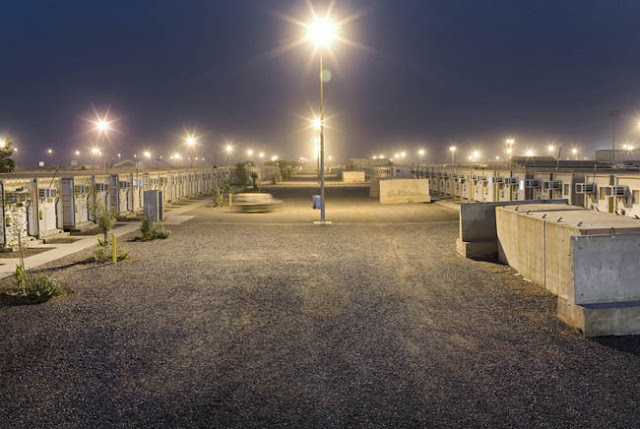 Hoping to prevent the Horn of Africa from becoming another refuge for Islamic terrorists post-9/11, the US has made Djibouti the headquarter of their multinational anti-terror campaign, Operation Enduring Freedom. They are on "B" security alert, same level than for places like Afghanistan and Iraq. This is ‘CLU-Ville’ or ‘Container City’, what the Americans call their living quarters at the US base, Camp Lemonnier. 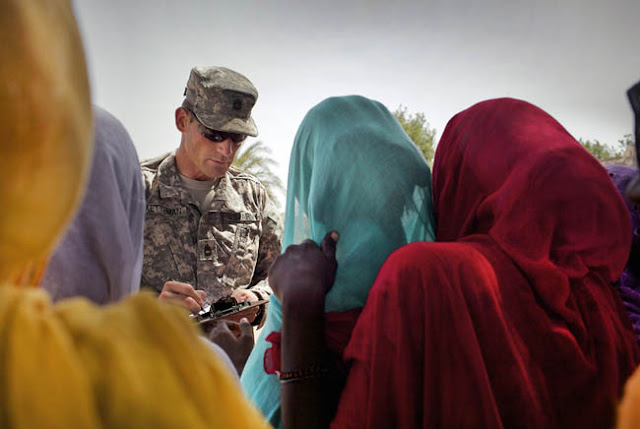 US military personnel from the Civil Affairs department of the US Army on a trip to Sagallou - a medical camp mission. The trip forms part of the "3D approach" of the US Army: Development, Democracy, Defense. 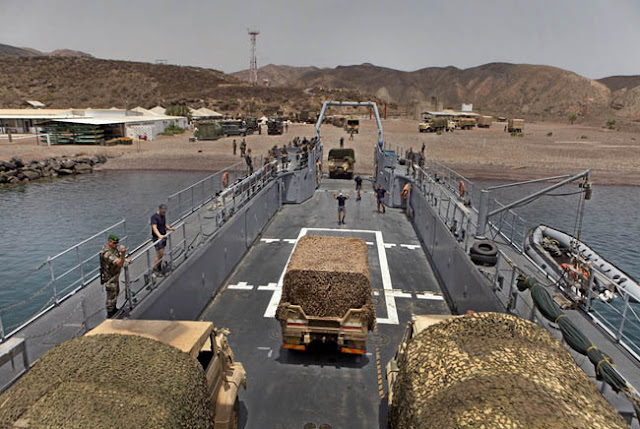 The Foreign Legion, a unit of the French army, sets off on an anti-guerrilla exercise. Djibouti offers the ideal terrain - it is hot and mountainous, just like Afghanistan. 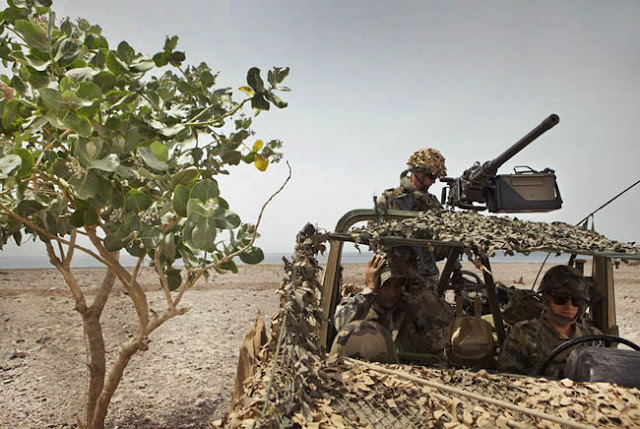 Sakatz (on top of the jeep), a Romanian man enrolled in the French Foreign legion, goes to take part in the setting up of a Forward Operating Base - an exercise in guerilla warfare in an environment very similar to the one encountered, for example, in Afghanistan. 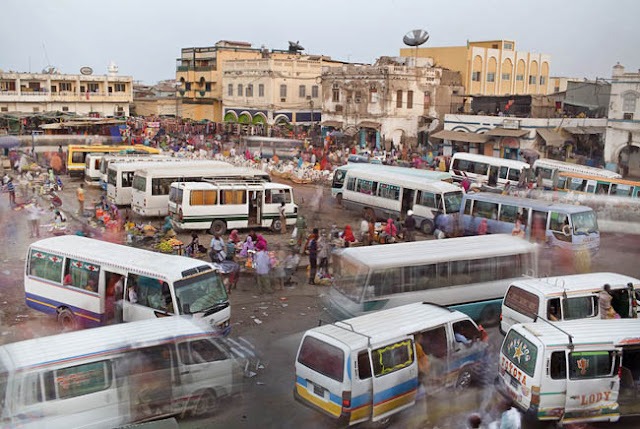 The capital's main market lies between the European and African quarters. Recently the Chinese, as Djibouti’s most important investors, are wielding more and more influence. 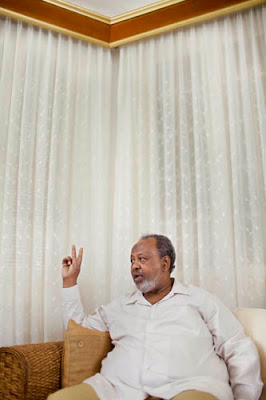 President Guelleh has been in power since 1999. Djibouti may be a tiny state, but he is one of Africa’s richest men. 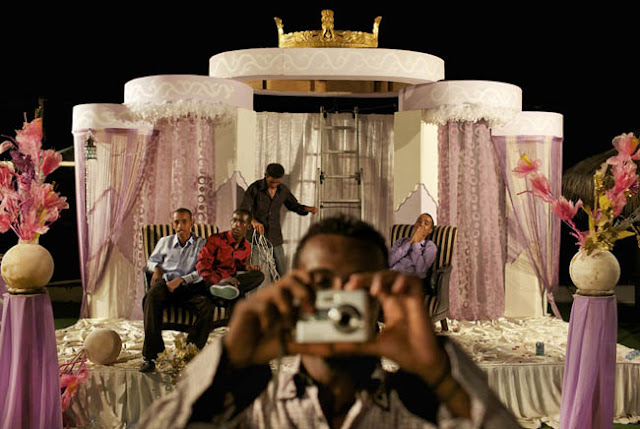 The end of a wedding celebration of a rich Djiboutian Army Colonel at the Sheraton hotel. 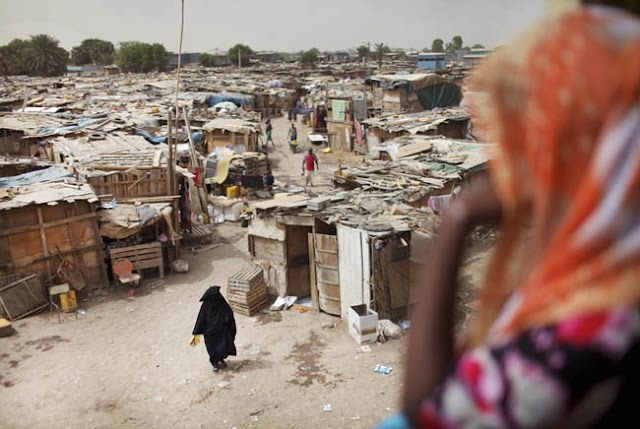 Half the population of Djibouti City lives in slums like Arhiba with little water, work or schools. 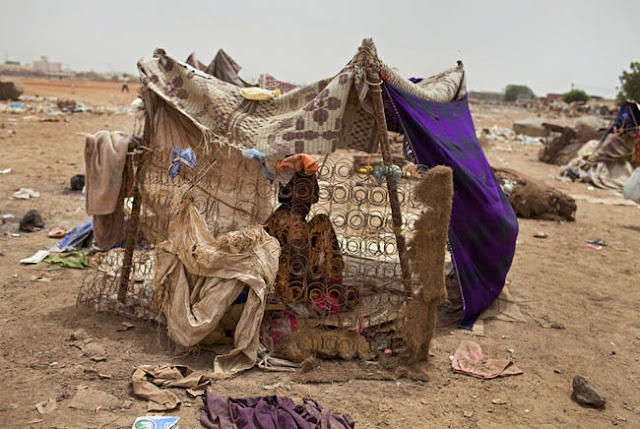 An illegal refugee in her "house". The poorest camp of all: a waste dump on the outskirts of Arhiba. It once was occupied by 4,000 huts like these—until their owners were evicted. Now, villas are being planned here.
0 comments 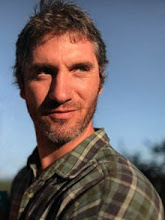